Enchiladas were one of the first dishes that really sparked my love affair with cooking. I could write a thesis on the variations I have tried and tested but these are the ones I keep returning to. 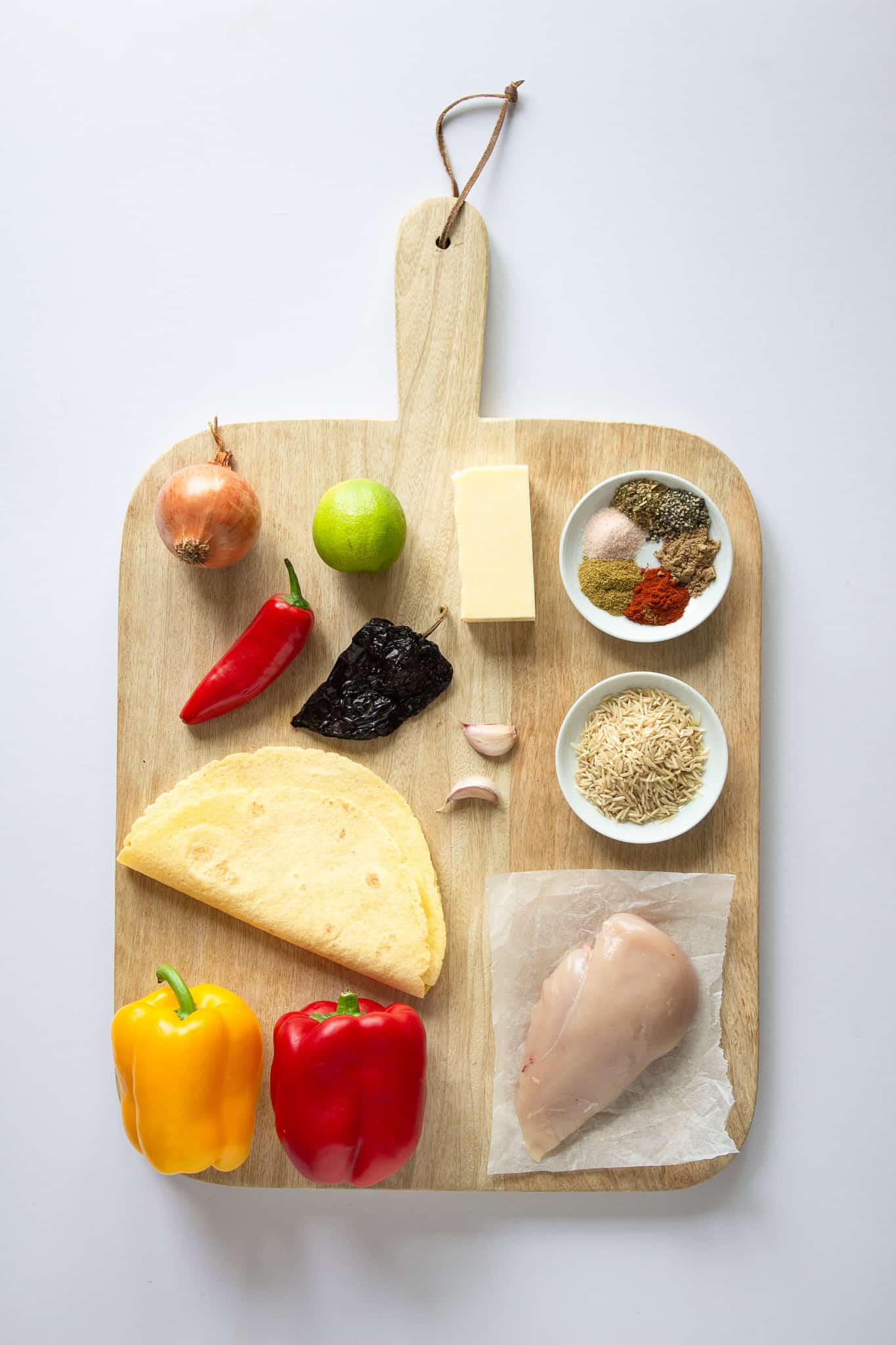 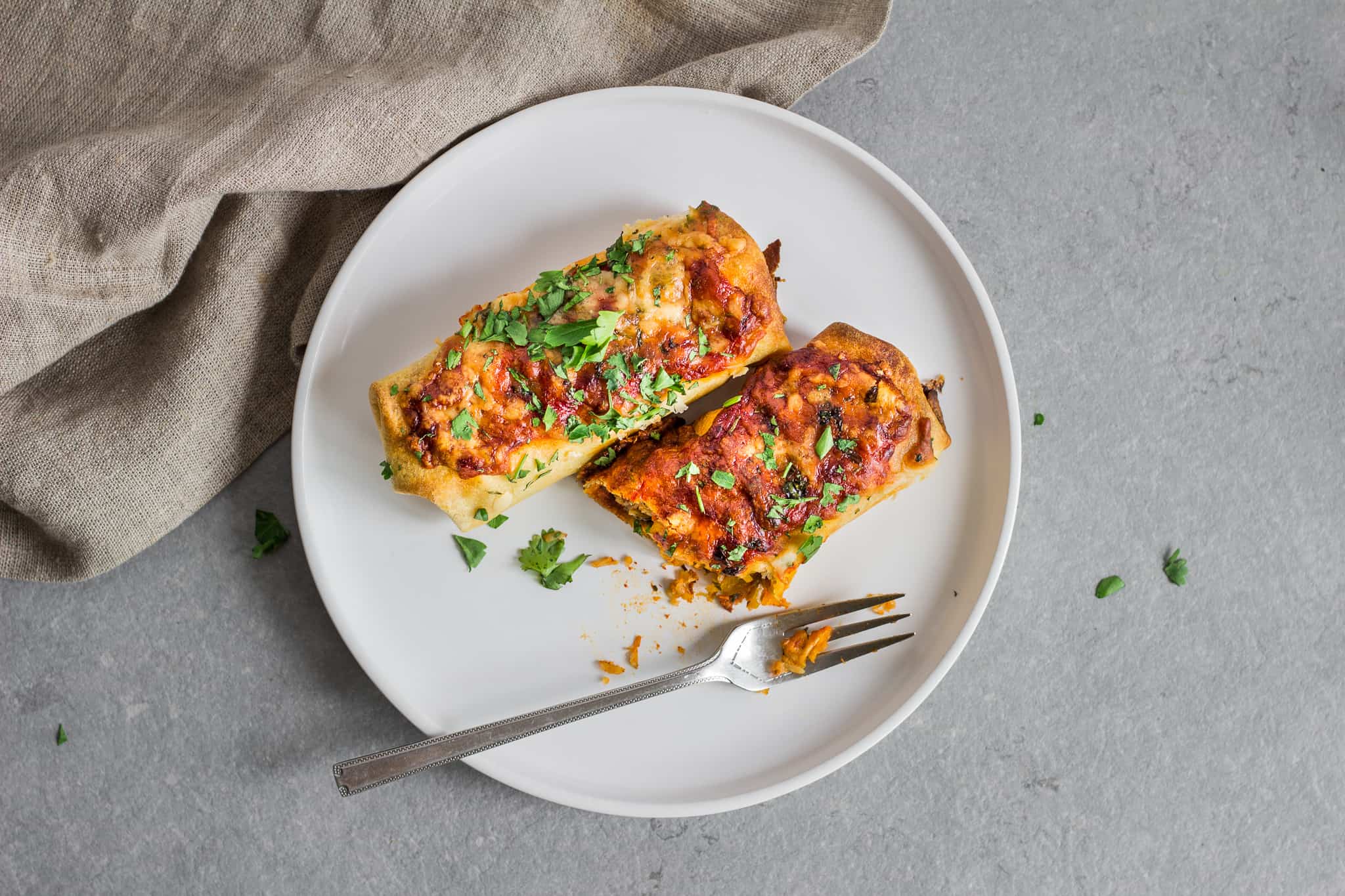 Pinch of Salt and Pepper

2. Halve the red Bell Peppers lengthways and remove the core and seeds. Drizzle the peppers with a little olive oil and a sprinkle of salt and pepper and place cut-side-down on a baking tray. Roast the peppers in the oven for 20-30 minutes or until the skin is just starting to blister and the flesh has softened.

3. Remove the skin from the roast peppers and place into a blender or food processor with 1 clove of garlic, 1 tsp. of ground cumin and coriander and 100ml of water. Blitz in the food processor or blender until a smooth sauce is achieved. Season with salt and pepper and set aside until needed.

1. Dice the chicken breast into small chunks, 1cm cubes roughly, and add to a mixing bowl. Add to the bowl, 1 tsp. Of ground cumin, ground coriander, 2 tsp. Of smoked paprika, the zest of 1 lime and salt and pepper. Mix together thoroughly and then refrigerate until needed – this can be done well in advance and the flavour will only improve with time.

2. Place a large frying pan over a medium heat with a lug of ground-nut oil. Add the sliced onions and fry for 3-4 minutes. Now add in the remaining minced garlic, diced chillies and the remaining spices (1tsp. each of Ground Cumin, Ground Coriander and Smoked Paprika) and cook for a further 2 minutes. Add the chicken to the pan and cook for 1-2 minutes before adding the peppers. Cook for a further 3 minutes until the chicken is cooked through and the sliced peppers have softened. Remove the pan from the heat.

3. Add 3 tablespoons of the pepper sauce to the pan along with the cooked rice and chopped coriander. Mix together until evenly combined. Season to taste with salt and pepper and a squeeze of lime juice.

ASSEMBLY OF THE CHICKEN ENCHILADAS

2. To assemble the chicken enchiladas, lay out the tortillas and spread with a thin layer of the pepper sauce. Next, add one-eighth of the filling to the centre of each tortilla with a sprinkle of grated cheese. Fold over the ends about 2cm and then roll over to seal. Place the enchiladas into a large, greased baking tray before spooning over about 1 tablespoon of the pepper sauce over the top of each enchilada. Finally, top each enchilada with a generous helping of grated cheese and place in the oven to bake for 20 minutes or until the cheese has started to become golden.

3. Remove from the oven and allow your chicken enchiladas to cool for 2-3 minutes. Serve with fresh guacamole.