A twist on the much loved hunter-style chicken. This is a real crowd pleaser and a great dish to have up your sleeve when you want to impress. The Cacciatore sauce is a personal favourite and works fantastically well as a rich and decadent sauce for any roast or grilled meat. 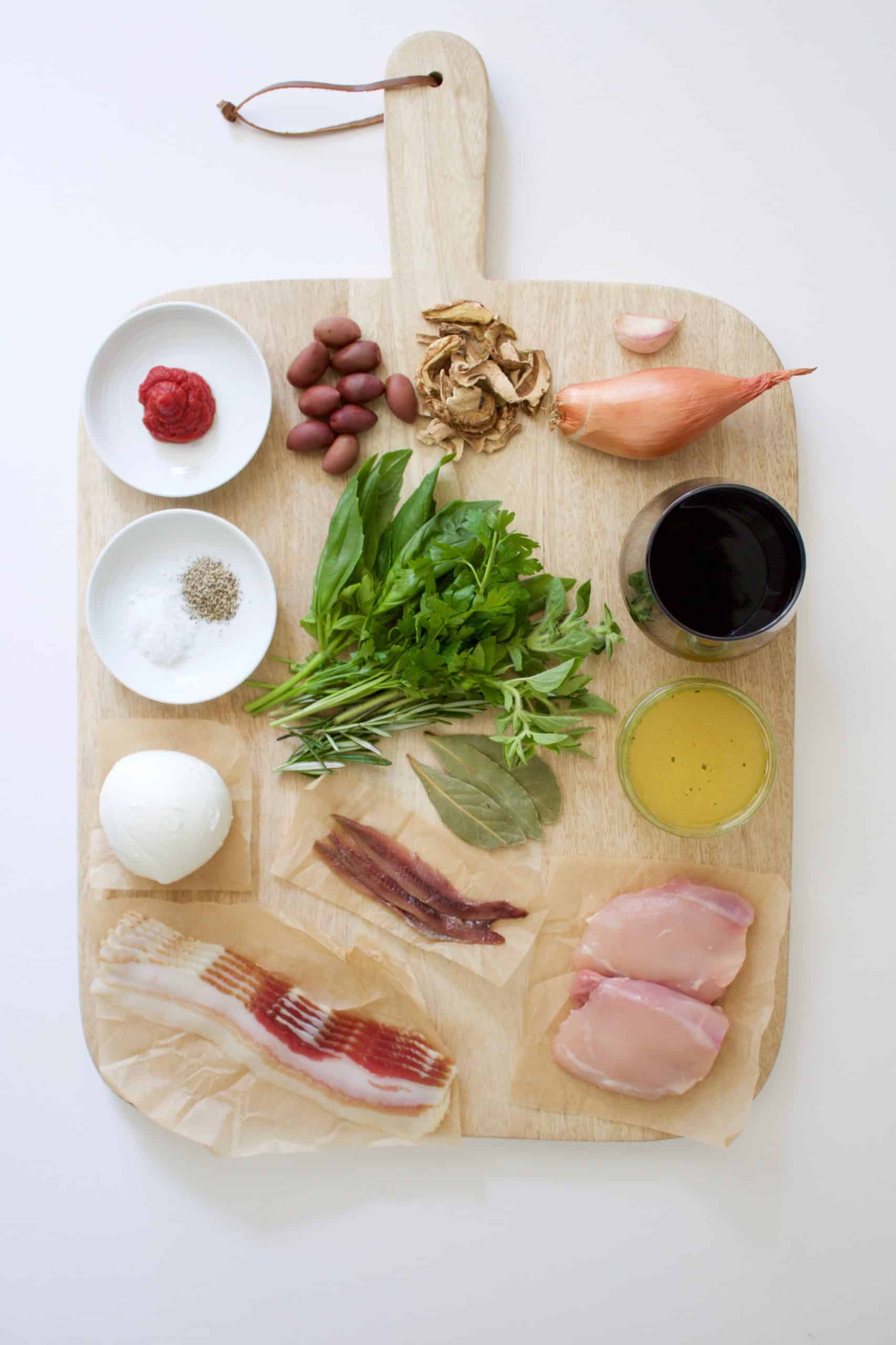 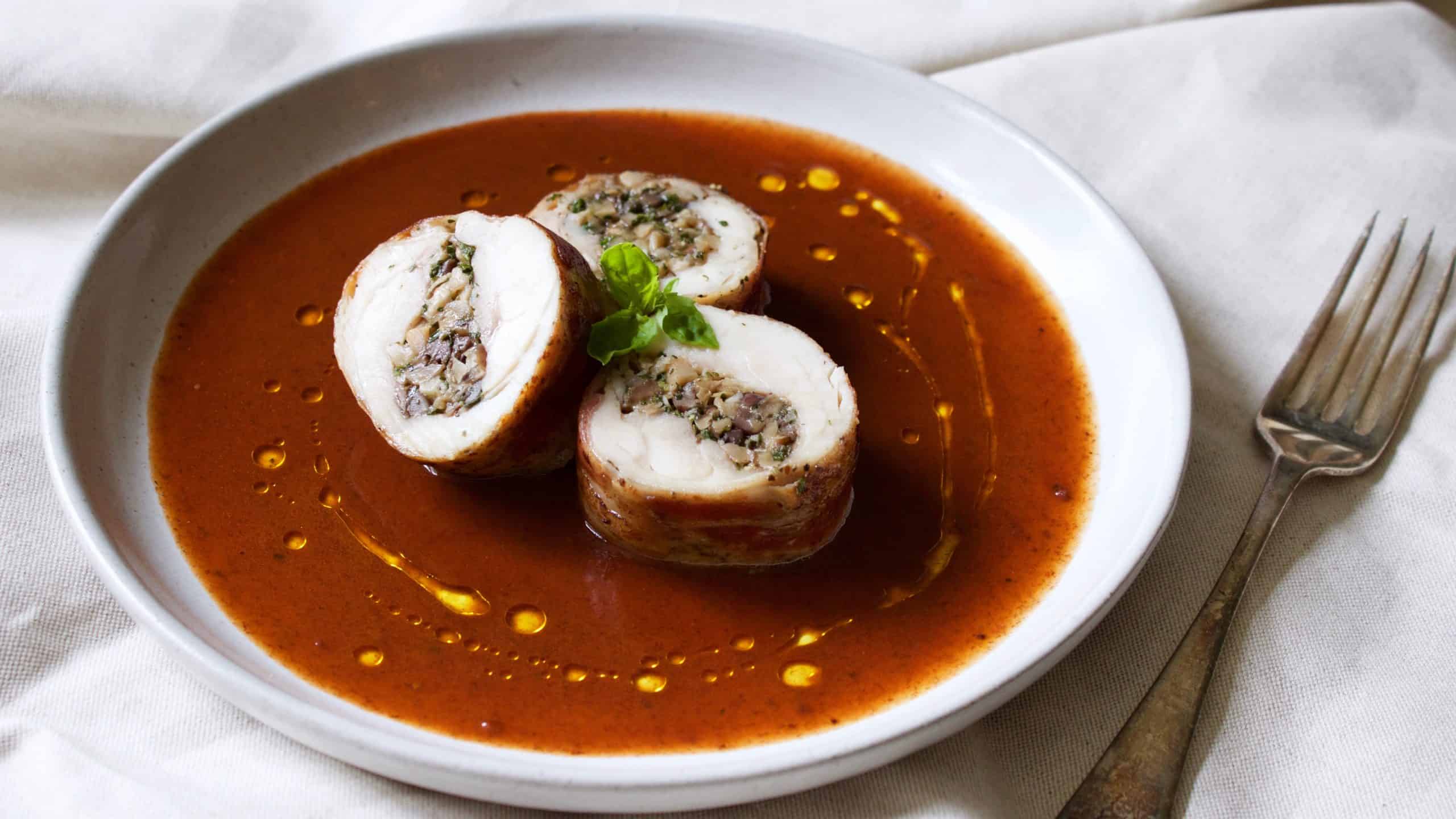 1. Place a large pan over a medium-high heat with a generous lug of olive oil. Add the shallots and sauté for 3-4 minutes or until starting to colour. Add in the garlic, bay leaves, rosemary and dried mushrooms and cook for a further 3-4 minutes stirring often to avoid anything burning.

2. Add the tomato puree with a splash of the wine and mix into the pan until everything is coated with the tomato. Turn the heat up to high and pour in the wine. Cook until the liquid is reduced by two thirds, stirring occasionally to prevent anything catching on the bottom of the pan.

3. Pour in the chicken stock along with the oregano and bring to the boil. Reduce the heat and simmer until reduced by half. Pass the sauce through a sieve and into another pan. Discard the contents of the sieve.

4. Shortly before serving, warm the sauce through and season to taste. Finally, whisk in a knob of butter and serve immediately.

1. To make the stuffing, place the dried mushrooms in a bowl and pour over hot water to rehydrate. Place a large pan over a medium heat with a splash of olive oil and add in the onion and fry for 2-3 minutes. Now add in the garlic, anchovies, olives and rehydrated mushrooms and cook for a further 3 minutes. Remove the pan from the heat and allow to cool.

2. Once cooled, combine with the chopped herbs and crumble in the mozzarella. Tip the the stuffing onto a large chopping board and dice the mixture into a fine and even consistency. Season to taste with salt and pepper.

3. Open up the Chicken thighs and season all over with salt and pepper. Lay the chicken thighs out next to each other slightly overlapping in order to get an idea of how long the ballotine will be. Make sure you have a pan large enough to fit the ballotine in. If not, simply divide the ingredients in half and make two smaller ballotines.

4. On a chopping board, lay out a large sheet of cling-film and lay the rashers of pancetta across the centre of the cling-film, overlapping slightly. Make sure you have a good amount of excess cling-film across all sides of the pancetta rectangle. Now lay the chicken thighs over the pancetta, again overlapping slightly. Try and leave some excess pancetta at the top of the chicken thighs so that it will overlap once rolled. Finally, spoon the stuffing mixture across the centre of the open chicken thighs.

6. To cook the ballotine, bring a large pan of water to a rolling simmer and place the ballotine parcel into the water. Simmer for 20 minutes.

8. Using a very sharp knife, cut the Ballotine into slices at least 3cm thick to ensure it stays warm. Serve immediately with a generous portion of the Cacciatore Sauce.