Almost certainly the inspiration behind the UK’s dearly loved Chicken Tikka Masala, dare I say Butter Chicken may well be the superior product, and certainly the more authentically Indian.

Butter Chicken, or Murgh Makhani, is said to owe its origins to the now-revered Delhi restaurant Moti Mahal and the enterprising Kundal Lal Gujral.

It is suggested that as a means to avoid wastage, and allegedly a lack of refrigeration, off-cuts and leftover pieces of Tandoori Chicken were simmered in a rich tomato gravy, steeped in butter and cream. Thus a new dish was born and forthwith credited a stroke of gastronomic genius.

Whether a happy accident or a considered masterstroke, there can be little argument over it’s deliciousness. Richly spiced chicken pieces charred and grilled to perfection are coated in a tangy tomatoey, creamy and above all else, buttery sauce – Makhani translating to “with butter”

Though not the most original dish to call one’s favourite curry, it is unquestionably mine. The discovery of the ability to create a genuine restaurant quality version using a considered process of marinating and cooking chicken separately to the gravy was a moment of extreme personal excitement for me and something I have since been doing frequently.

Our version riffs on the frequency of nuts and seeds used in traditional Butter Chicken sauces. We use my much-loved ingredient of Peanut butter to boost the flavour of the creamy, buttery chicken to great result whilst adding the savoury richness of peanut. 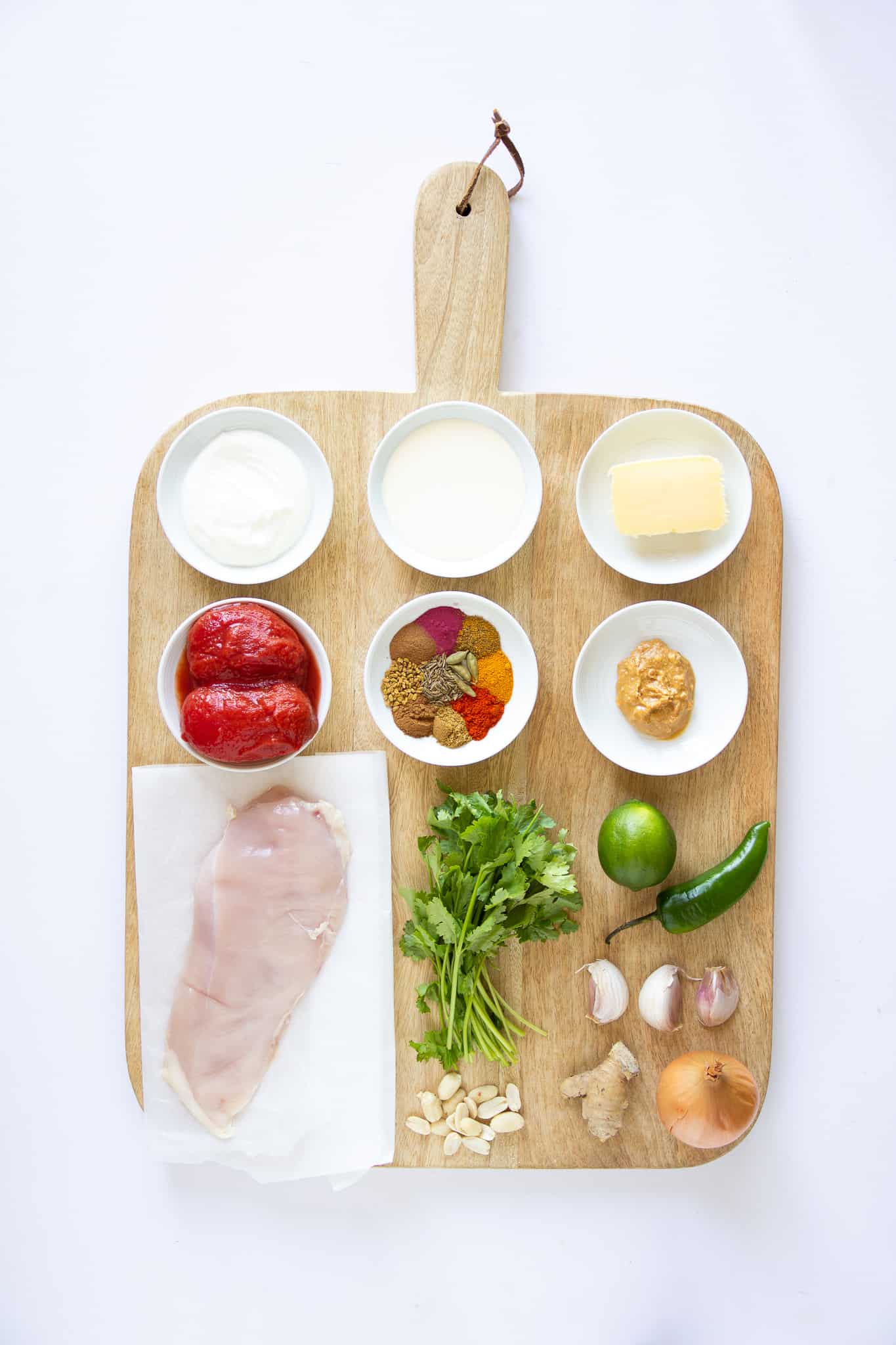 As with many Tandoori and Tikka recipes, this uses a two-step marination process.

The first is short (relatively), in an acidic, spicy marinade. Along with a healthy dose of salt, the acid helps to tenderise the meat and lays an initial, spicy foundation. An acidic marinade will actually start to cold-cook the meat, in the early stages, tenderising. Left too long, however, an acidic marinade will yield dry and stringy meat as it becomes ‘overcooked’.

To avoid this, after an hour the second, heavily spiced, yoghurt-based marinade is added. This transforms your marinade to a more fat-based mixture, preventing the meat from overcooking but also works to transfer flavour, something fat-based marinades work extremely well for. This marinade can then be left for up to 24hrs.

Chicken Tikka and Tandoori Chicken usually uses red food colouring to achieve the deep red colour it is known for. We have used Beetroot Powder as a natural and tasteless alternative. You are welcome to add a splash of food colouring if desired or omit all colouring entirely – the flavour will remain the same.

TIP – Re-sealable zip-lock bags work extremely well for this and will allow the chicken to be more easily manipulated and coated in the second marinade.

TIP – I usually cook the chicken whilst finishing cooking the gravy.

TIP – If you do not have skewers or a deep enough baking tray you can place the chicken over a wire rack or even a griddle pan – the aim is to have as much air circulating around the pieces as possible.

TIP – I usually cook the chicken at this point, whilst the sauce is simmering.