WHAT ARE THEY AND HOW TO COOK THEM
By Carmen | 20 December, 2021
Have you ever come across Jerusalem Artichokes while grocery shopping and wondered what they were? Well first of all, as appealing as the name may sound, Jerusalem artichokes are not artichokes at all. In fact, they do not hail from Jerusalem!

For the past decades, they have been curiously neglected, yet they have been making a come back slowly but surely. These lumpy bumpy vegetables have indeed increasingly made an appearance on trendy restaurant menus and in supermarket aisles. If you’re curious about this mysterious and funny looking vegetable, we’re here to tell you all about them. From their intriguing name to their origin, and most importantly how to use them in your cooking!

WHAT'S IN THE NAME?

When it comes to their name, Jerusalem Artichokes acquired its denomination as a result of linguistic mess. The tuber is a member of the sunflower family and its yellow flower also looks very similar to it. Italian immigrants referred to it as “girasole”, the Italian word for sunflower, which translates to ‘turning to the sun’. It appears that over a few decades, the mispronunciation of the word turned into Jerusalem. In a more straightforward manner, the artichoke part of the name comes from the taste, which is similar to the artichoke we know of.

Curiously, the French’s name for the plant, “topinambour” is also the result of confusion. It actually comes from the name of a Brazilian tribe, the Tououpinambaoults. Six members of the tribe were brought to Paris in 1613 to be presented to the king's court around the same time as the root vegetables were introduced to the country. The French assumed that the exotic tubers also originated from Brazil and started calling them topinambours.

In the United States, the shifty root vegetables are referred to as “sunchokes”. The name was created in the 1960s by Frieda Caplan, a speciality produce distributor who decided it needed a catchier name. 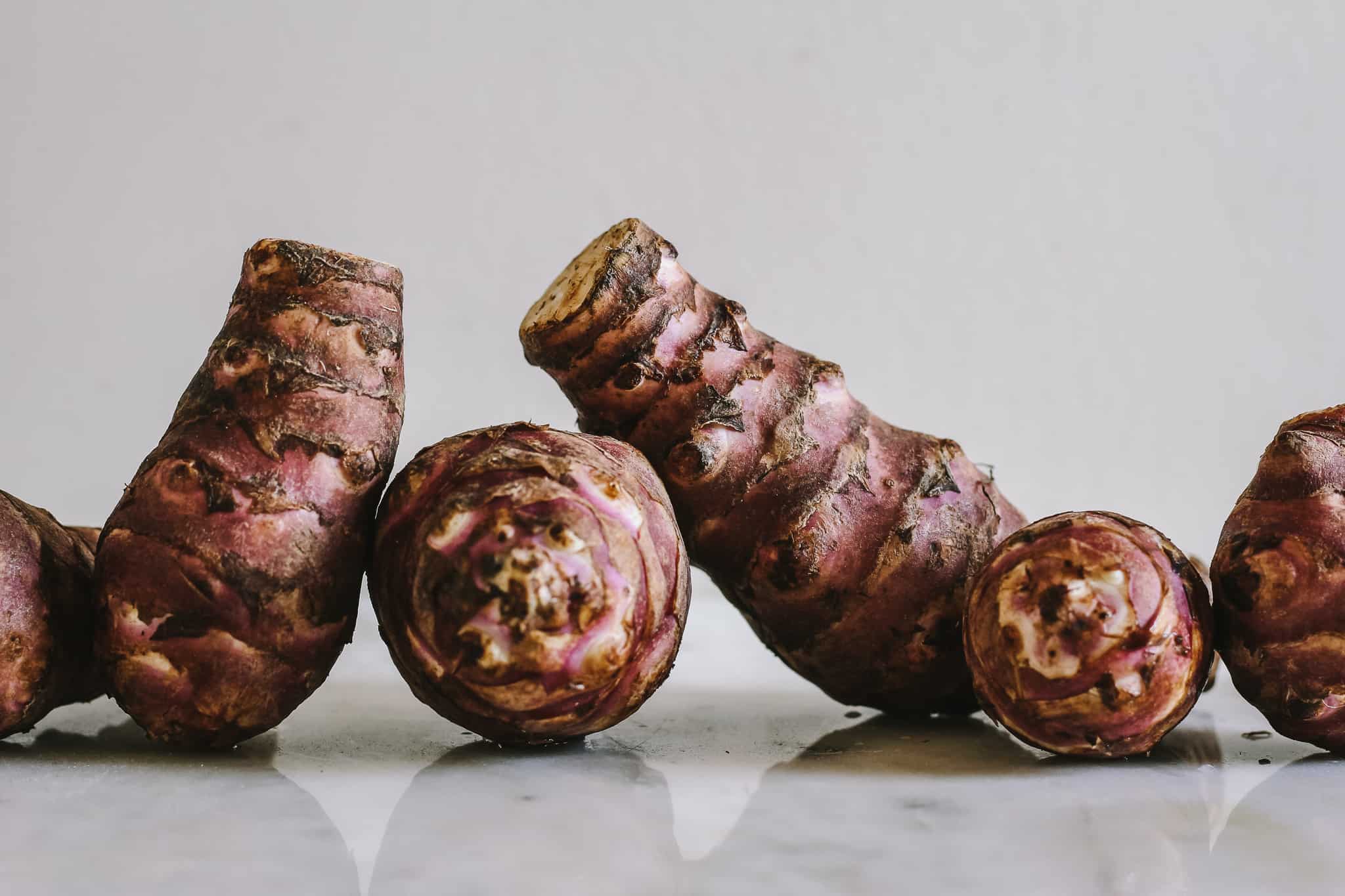 SO WHAT ARE JERUSALEM ARTICHOKES?

Technically speaking, the Jerusalem artichoke is related to the sunflower. The plant can grow up to 3 meters, bearing bright yellow flowers. Similarly to potatoes, the edible tubers grow underground.

There are a few varieties, which differ in shape and in colour, ranging from light yellow to copper-purple. The variety Fuseau is the one found most often commercially as it is less knobbly and therefore simpler to cook with.

Very easy to grow they are actually quite invasive plants. The twisted tubers are harvested from October through March and can be stored for a few weeks in the fridge. 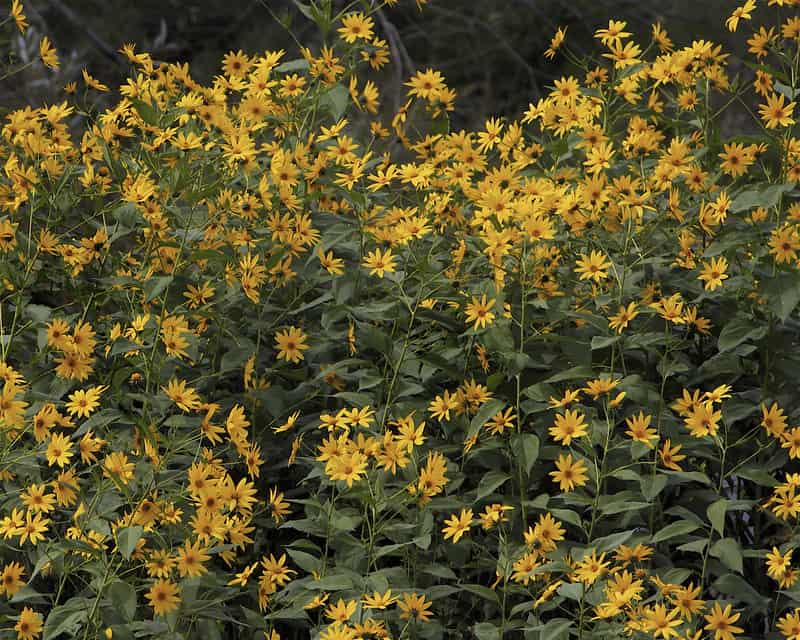 THE HISTORY OF JERUSALEM ARTICHOKES

The root vegetable is native to North America, specifically to the centre of the United States and was cultivated by Native Americans near the lake regions of Canada. It was discovered in 1585 by Sir Walter Raleigh. It was introduced to Europe in 1616 by the French explorer Samuel de Champlain, and was initially called Canadian Artichoke as well as Canadian Truffle. Throughout the 17th century, it grew in popularity and was widely cultivated in Europe due to the abundance of the harvest and its great ease of cultivation.

By the end of the 18th century, however, it was gradually shunned in favour of the potato. Promotional campaigns made it more popular and Jerusalem Artichokes ended up as food to livestock. The scraggly vegetable was rediscovered during World War II, as potatoes were requisitioned for war, and saved millions from starvation. Sadly as a result of this, Jerusalem artichokes, alongside swedes and turnips, were unpopular for many who went through the war and were scorned for many years after. They had indeed been so overused during war years, often badly cooked without cooking fats, that altogether they were a reminder of unpleasant times.

Thanks to the younger generations who no longer make this association, Jerusalem artichokes have seen a revival. They are now easy to find from late Autumn through early Spring. 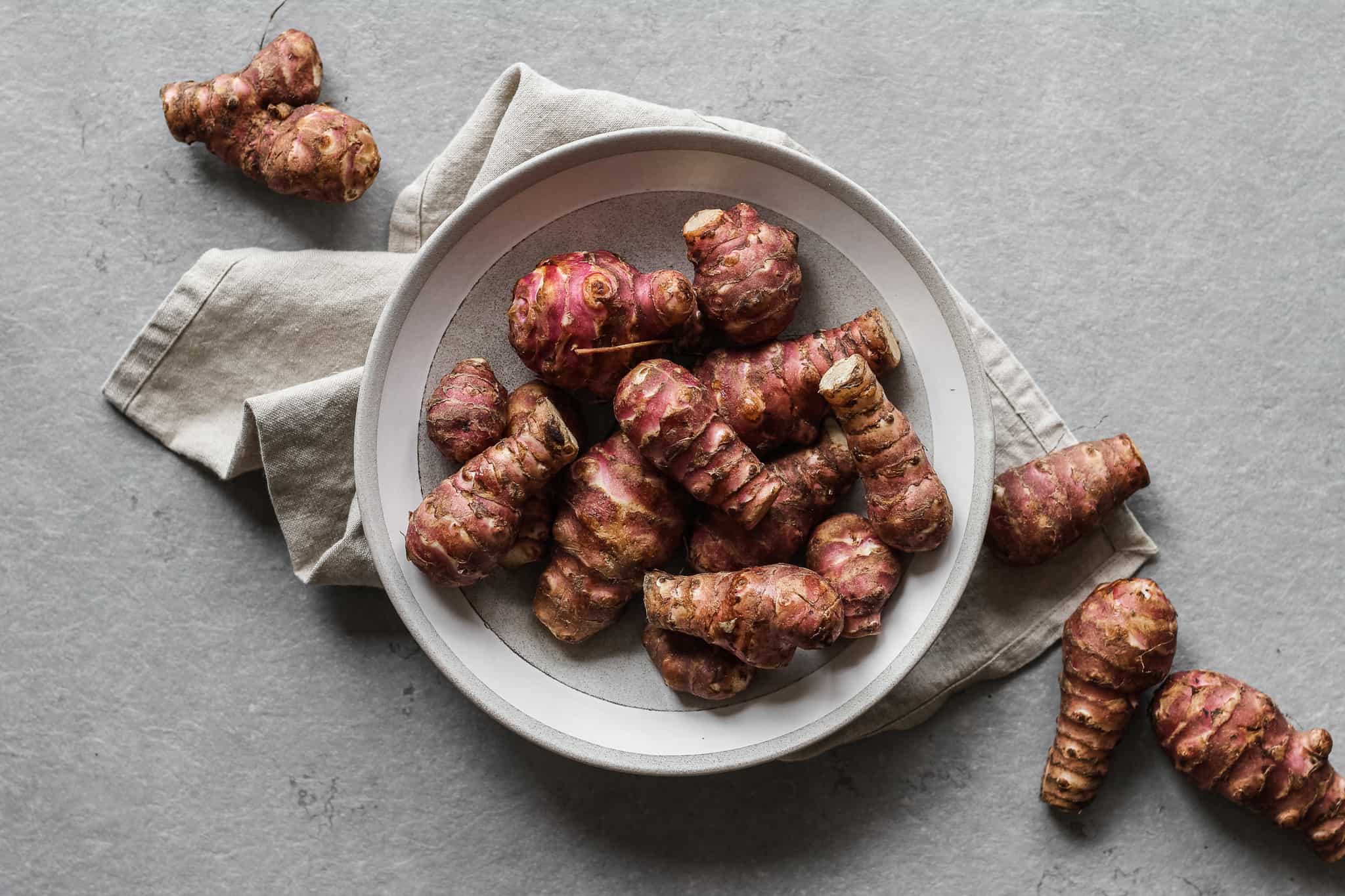 HOW TO COOK JERUSALEM ARTICHOKES

Jerusalem artichokes are sweet, nutty, with a hint of vanilla, and have a delicate artichoke flavour. They are actually incredibly versatile and have been celebrated by chefs in both savoury and sweet recipes. They can take the form of velvety purees, soups, hearty gratins, crunchy crisps, stew fillings, creamy mash and even ice cream! In certain parts of Europe, Jerusalem Artichokes are even used to make cordial or brandy! They pair well with game as well as poultry, fish dishes or root vegetables.

With its tawny skin and white interior, the tuber can be handled similarly to potatoes. Easy to prepare they don’t need to be peeled. and need a light rinse to remove any residual dirt. In terms of preparation, boiled, steamed, fried, pickled, grilled or roasted - anything goes. Unlike the often compared potato, they can even be eaten raw!

Unlike potatoes, they do not have any starch, but rather inulin, which people with diabetes can consume it without negative effect.

On the subject of negative effects, we cannot mention Jerusalem Artichoke without making a quick reference to one of the issues that come with the delicious root: flatulence (there, we said it). Yes, Jerusalem Artichokes do bear the unfortunate side effect of causing the odd bout of gastric activity - often in varying degrees from person to person! We have found that boiling them with lemon juice or bicarbonate of soda did help mitigate the effect!

We've replaced the usual potatoes in the below recipes with Jerusalem Artichokes, to a great result. Like us, why not experiment and swap potatoes for the tasty tuber! 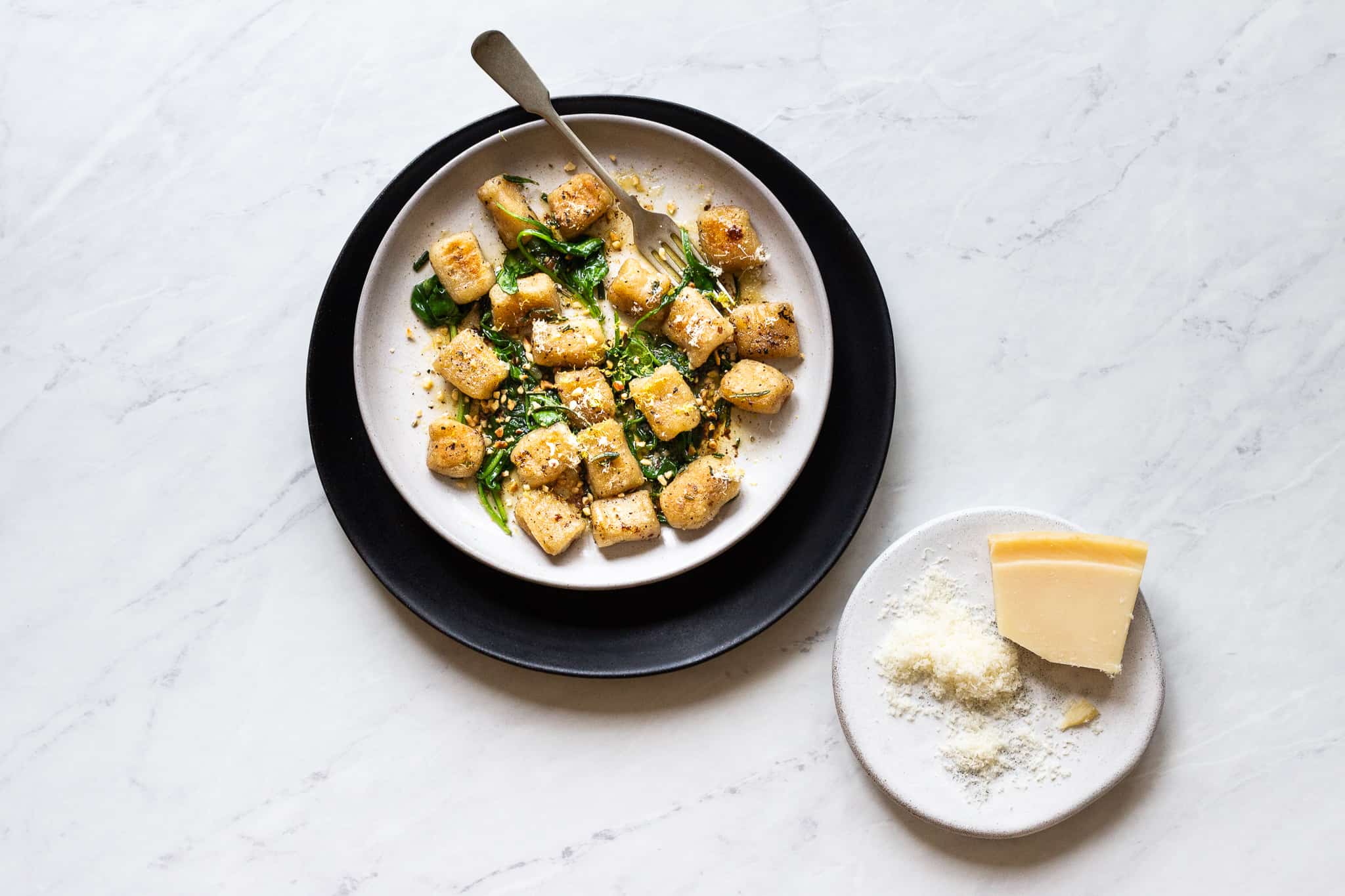 We have replaced the potatoes in gnocchi with Jerusalem Artichokes, bringing a lovely hazelnut and artichoke flavour to the little dumplings. Once cooked, all they need is a little brown butter and a grating of parmesan.
RECIPE HERE

Replacing the usual potatoes found in massaman curry with Jerusalem artichokes adds a little sweetness which goes beautifully along with the cinnamon and adds a whole new dimension to the dish.
RECIPE HERE 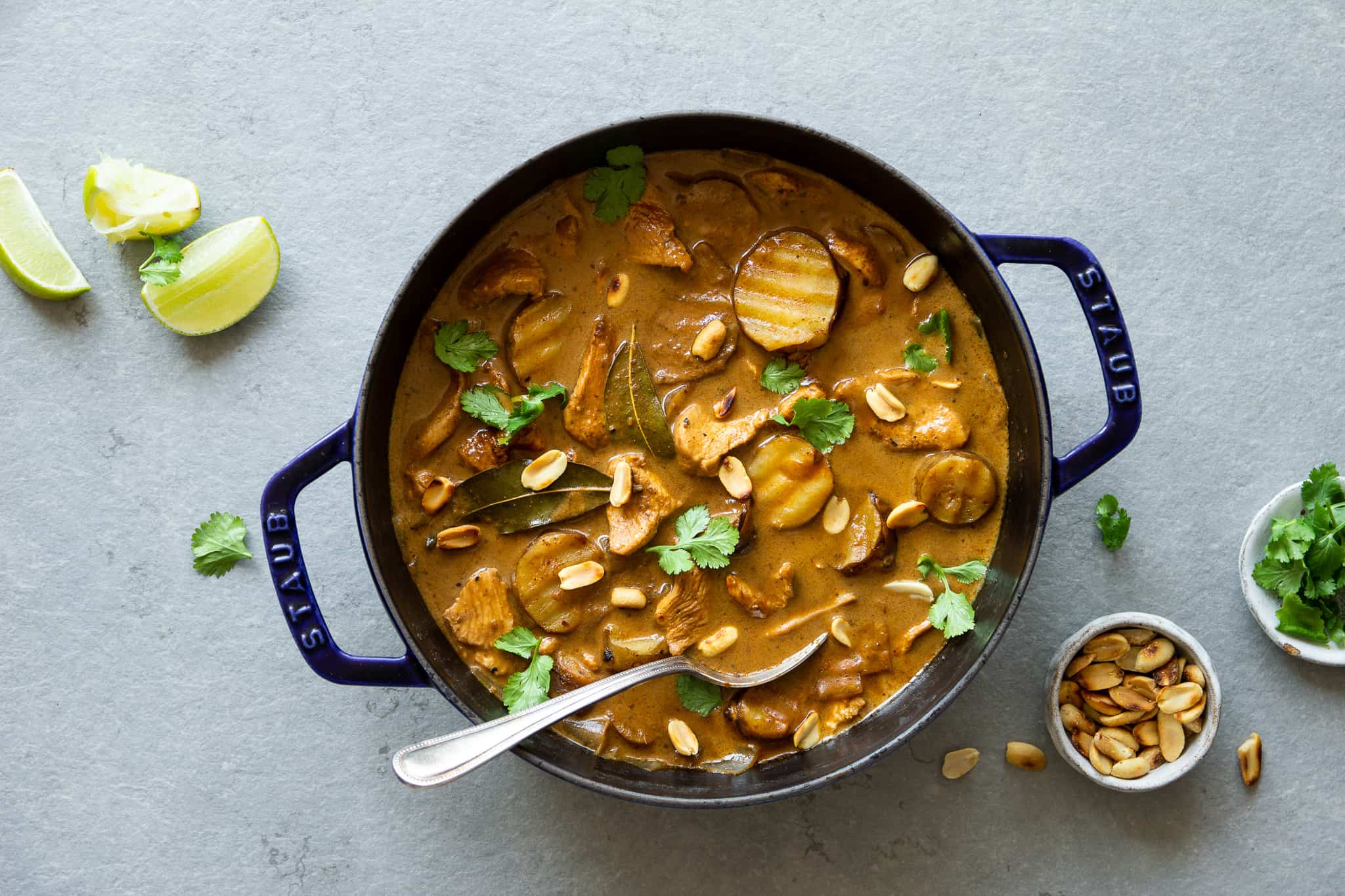 Have you ever attempted cooking Jerusalem Artichokes? If you have so far shied away from trialling these knobbly vegetables, we urge you to give them a go! Let us know how you find them in the comment section below. 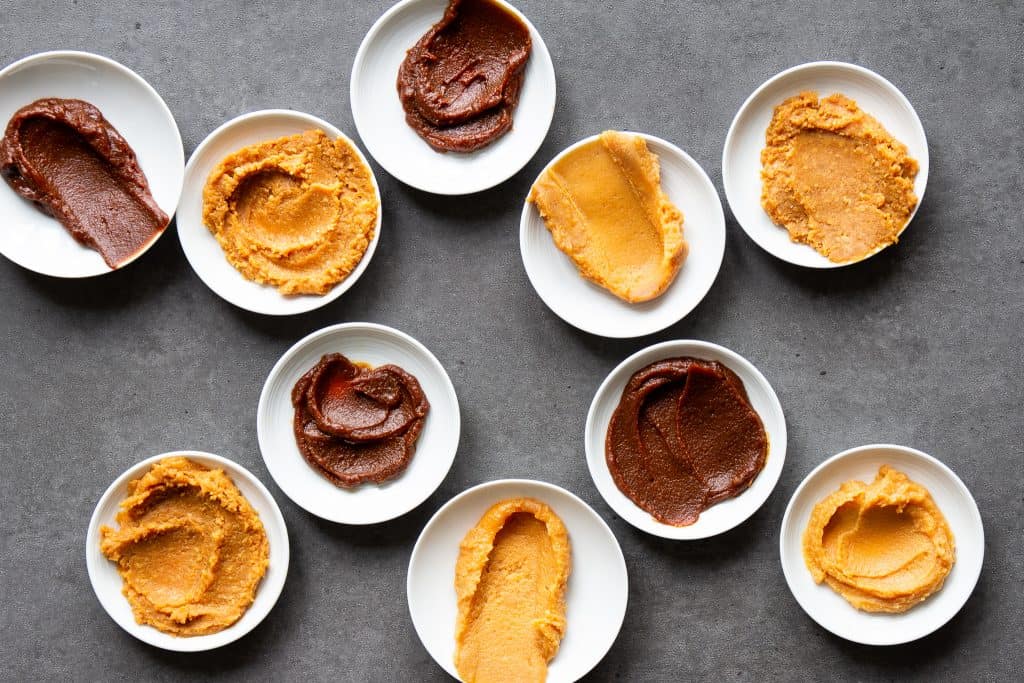 ALL ABOUT MISO: WHERE IT CAME FROM, HOW IT’S MADE AND HOW TO USE IT 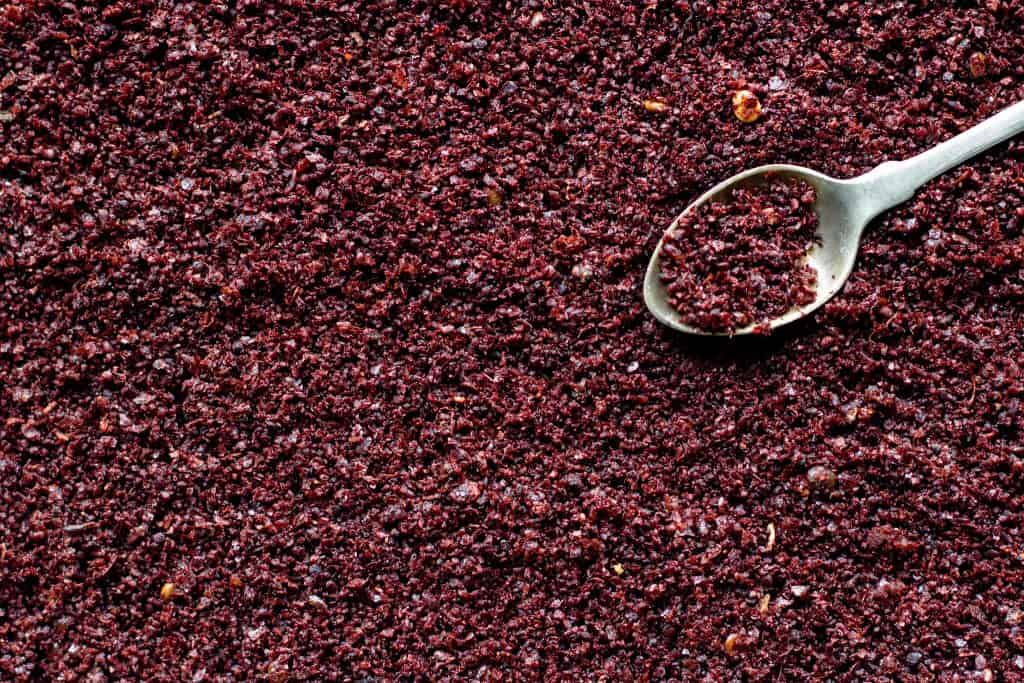 WHAT IS SUMAC, WHERE DOES IT COME FROM AND HOW TO COOK WITH IT 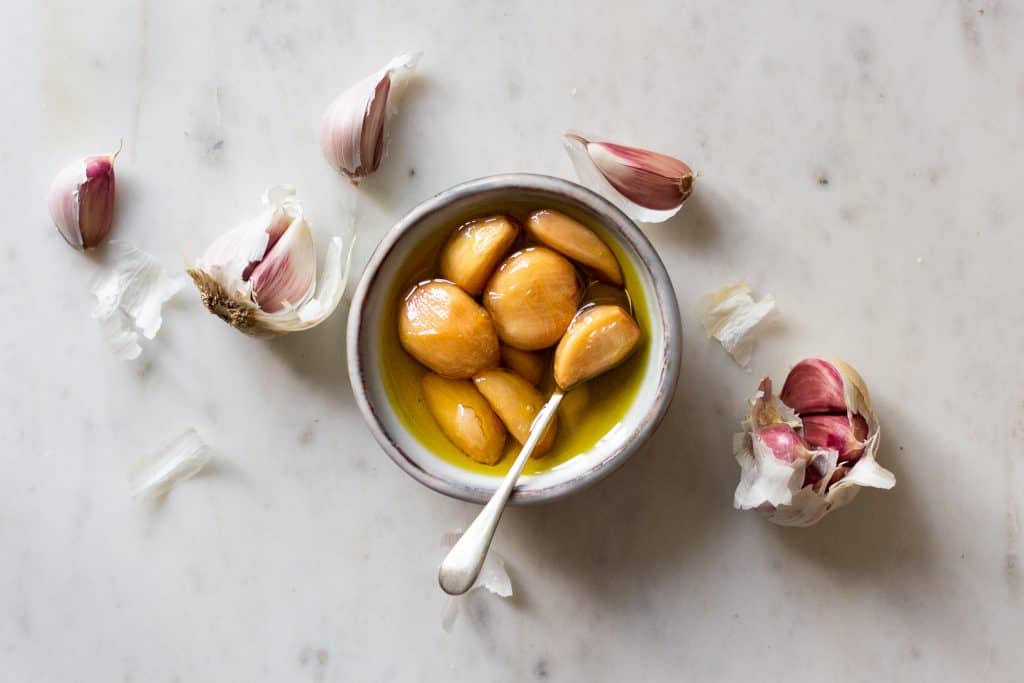 WHY YOU NEED TO CONFIT GARLIC