WHAT IS SUMAC?
Where Does It Come From
and How to Cook With It

By Carmen | 01 March, 2019
Sumac - it’s become terribly trendy over the last few years. You likely will have first encountered sumac sprinkled over hummus in your favourite Middle Eastern restaurant - the sour-sweet, burgundy powder that no-doubt gives those dishes that ‘authentic’ je ne sais quoi. Later, you may have noticed it cropping up with more frequency in your favourite food magazine and then bought a pot of it on a whim with no idea how to use it.

But how to use this mysterious pink powder?

Fear not, we’re here to share. What Sumac is, what it tastes like, its history plus why you’re hearing more about it now, and most importantly, what to do with it.

If you haven’t yet discovered the wonders of sumac, you’re in for a treat.

Sumac is a dried deep-burgundy spice commonly found in Middle Eastern cooking. The name sumac comes from the Arabic word summãq which means deep red. Sumac is made from the berries of the wild sumac flower which are ground to a coarse powder form. Its flavour can be best described as tart, reminiscent of lemon, green apple or passion fruit. It has a truly vibrant and exciting aroma that can really elevate your cooking to new heights and create layers of taste that add richness to your dishes. 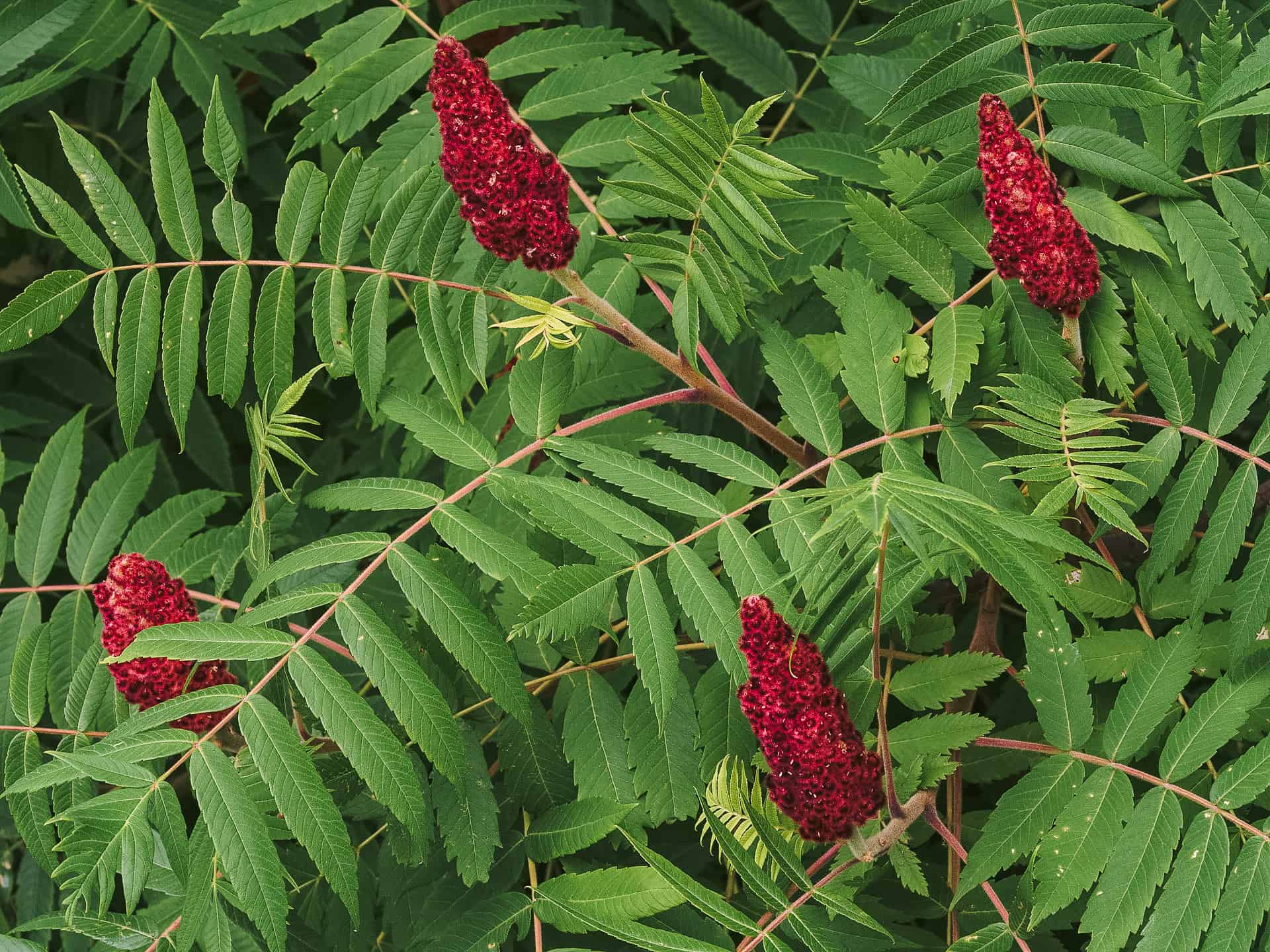 WHERE DOES IT COME FROM?

Sumac is the generic name for the spice that is the product of the plant Rhus coriaria. There are many flowering plant species around the world that are part of the Rhus genus. They look very similar to the sumac we’ve been referring to so far, however it is wise to notice that quite a few of them are actually poisonous! Not to worry though, the sumac sold for consumption is totally safe to eat. (One thing to point out is that if you have a severe allergy to cashews or mangoes, you may want to steer away from sumac as it belongs to the same family, Anacardiacecae.)

The sumac shrub is native to the Mediterranean and Western Asia and can grow up to 10 meters high. In late summer, it produces vibrant red fruits that are clustered together in the shape of inverted cones. These dense clusters are made of many small red drupes (fruits containing a single seed), about the size of a large peppercorn. These drupes are collected and sun-dried for 7 to 10 days, before being ground into a coarse powder. 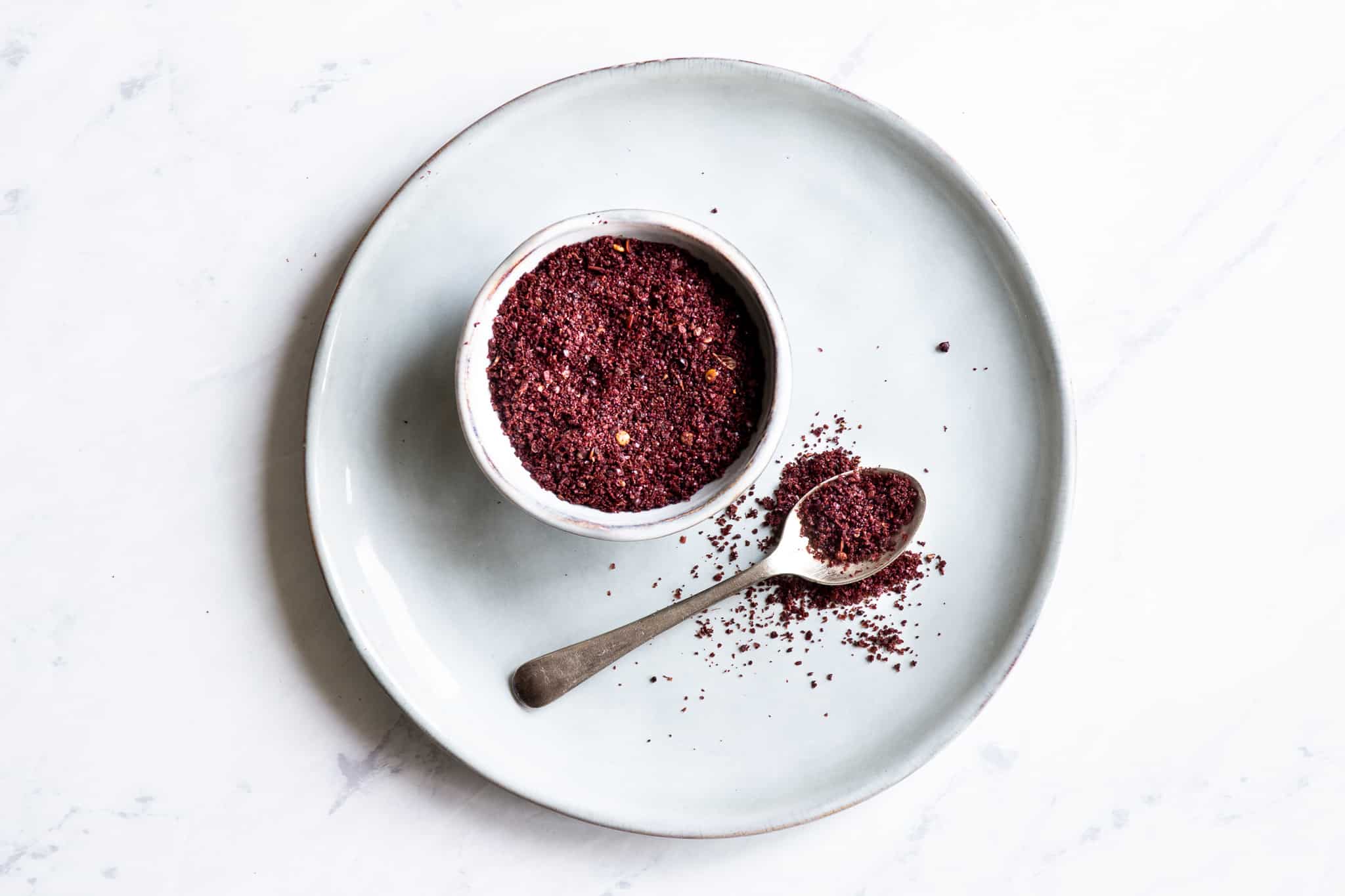 WHY IS IT ONLY BECOMING POPULAR NOW?

Sumac may just be reaching our kitchens today, but it has actually been used for a very long time. Ancient Greek medicinal texts by the physician Dioscorides (circa 40 to 90AD) wrote about sumac’s medical and antiseptic properties. It was also frequently used in Roman kitchens to add acidity to dishes before lemons were introduced in the area around 310BC (they actually come from North Myanmar & Western China!). During Medieval times, sumac was among the many spices imported to Europe, to be used as medicine, as a culinary spice, or as a dye. It was even referenced in a recipe in the Latin manuscript Liber de Coquina, (the book of cookery), one of the oldest medieval cookbooks from the 14th century. The spice has remained a staple in Middle Eastern and Arabic cuisines but its use in Europe seems to have declined over time.

The recent resurgence of sumac in our grocery shops, however, is linked with the surge in the popularity of Middle Eastern food in the last 5 years. The cuisine’s ability to suit a variety of tastes and diets - from vegetarians to meat-eaters to healthy food seekers - could be one of the factors behind its growing appeal. With increasing numbers of Middle Eastern restaurants appearing on the London food scene came a desire from people to cook those dishes. The reference from chefs like Yotam Ottolenghi (Rovi, Nopi), Sarit Packer & Itamar Srulovich (Honey & Co.) or Selin Kiazim (Oklava), to sumac in their respective cookbooks, created a new demand for the spice in the UK. Nowadays, sumac is widely found in major supermarkets across the UK. Hurray!

HOW TO USE IT

So now that you know a little bit more about sumac, it’s origin and history, the big question is what to do with it?

Sumac is a really versatile spice that can be used in countless ways. If you’re lacking inspiration, think of it as lemon zest. You probably often use lemon or lemon zest when cooking, right? Well next time, rather than reaching out for that lemon, try sumac instead!

Traditionally sumac is often used in Middle Eastern cuisine as a garnish, to add colour and a pop of acidity to a dish, such as salads, hummus or flatbreads. It lends itself really well against fatty meats like lamb or duck as it cuts through its richness and enhances the fat’s natural flavours. Also, as it is in a dry powder form, it can easily be added to dry meat rubs which will add a wonderful brightness to the mix.

Another way that sumac is often used is as one of the ingredients that make up Za’atar, a beautifully fragrant spice blend which is used extensively in Middle Eastern cooking.

For a traditional use of sumac, try our Middle Eastern recipes such as our Fattoush Salad with Strawberries or our Turkish Mackerel Sandwich. Both recipes use sumac to bring in colour and a bright acidity throughout the dish. 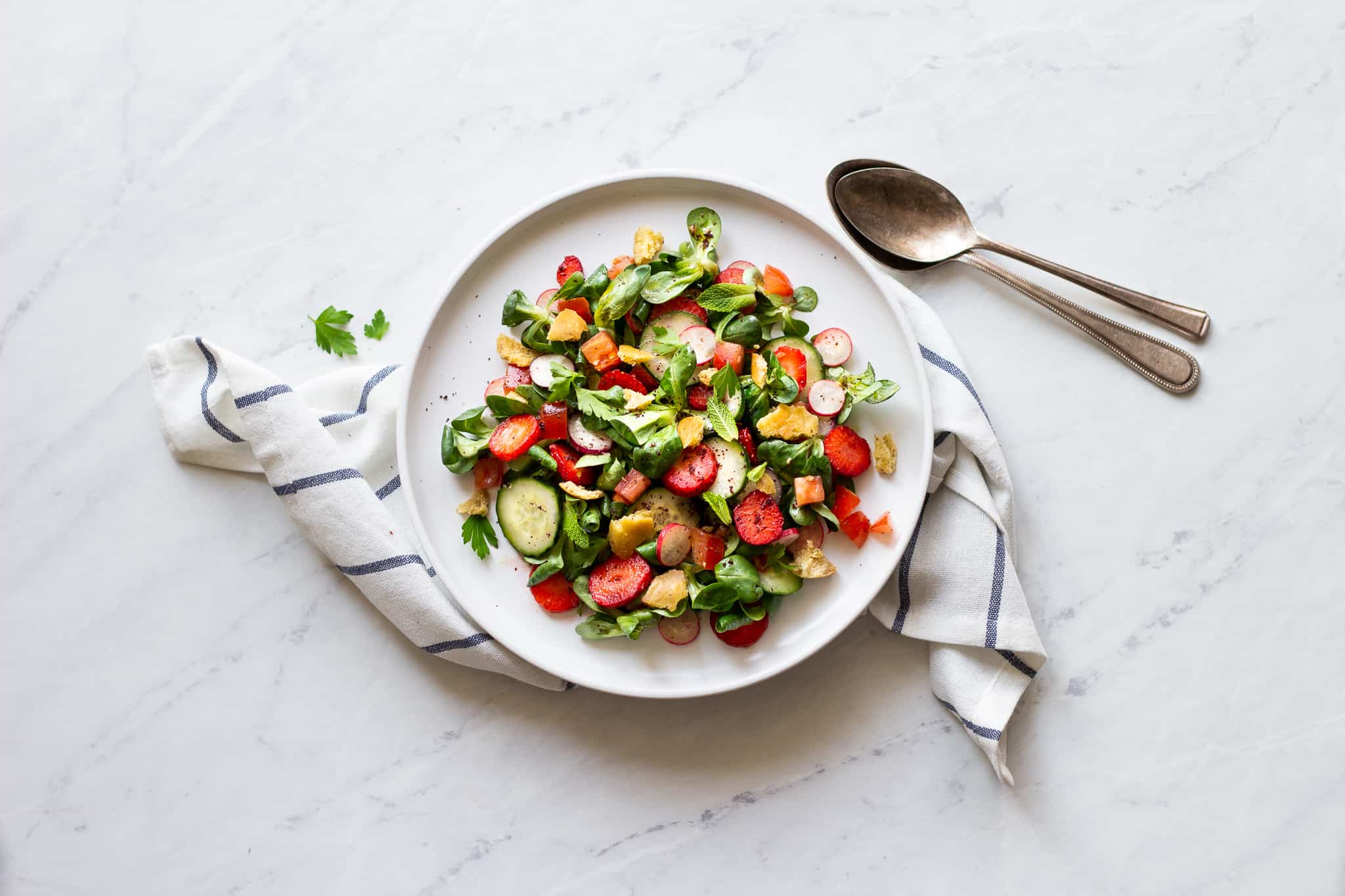 Fattoush is a delicious summery Lebanese salad. It is traditionally made with toasted pitta, purslane, tomatoes, cucumbers, radishes and herbs. The sumac vinaigrette that it is tossed in brings it all together in a refreshing healthy salad. We’ve added strawberries to our version for an added sweet and acidic punch.
RECIPE HERE

A perfect addition to grilled fish - the tart, citrusy tang of sumac makes for an excellent alternative to lemon and complements the rich oily fish perfectly.
RECIPE HERE
For a more unusual way to use the spice check out our Sumac Shortbread or Sumac Eton Mess recipes. The addition of sumac absolutely elevates these two desserts! Shortbread biscuits are rich and deliciously buttery by nature. The addition of sumac perfumes the dough with a lovely lemony and passion fruit aroma, and somehow make the biscuits taste all-the-butterier. Dipped in a little white chocolate, the result is rich, lemony and elegant shortbread you’ll reach out for more than once.
RECIPE HERE 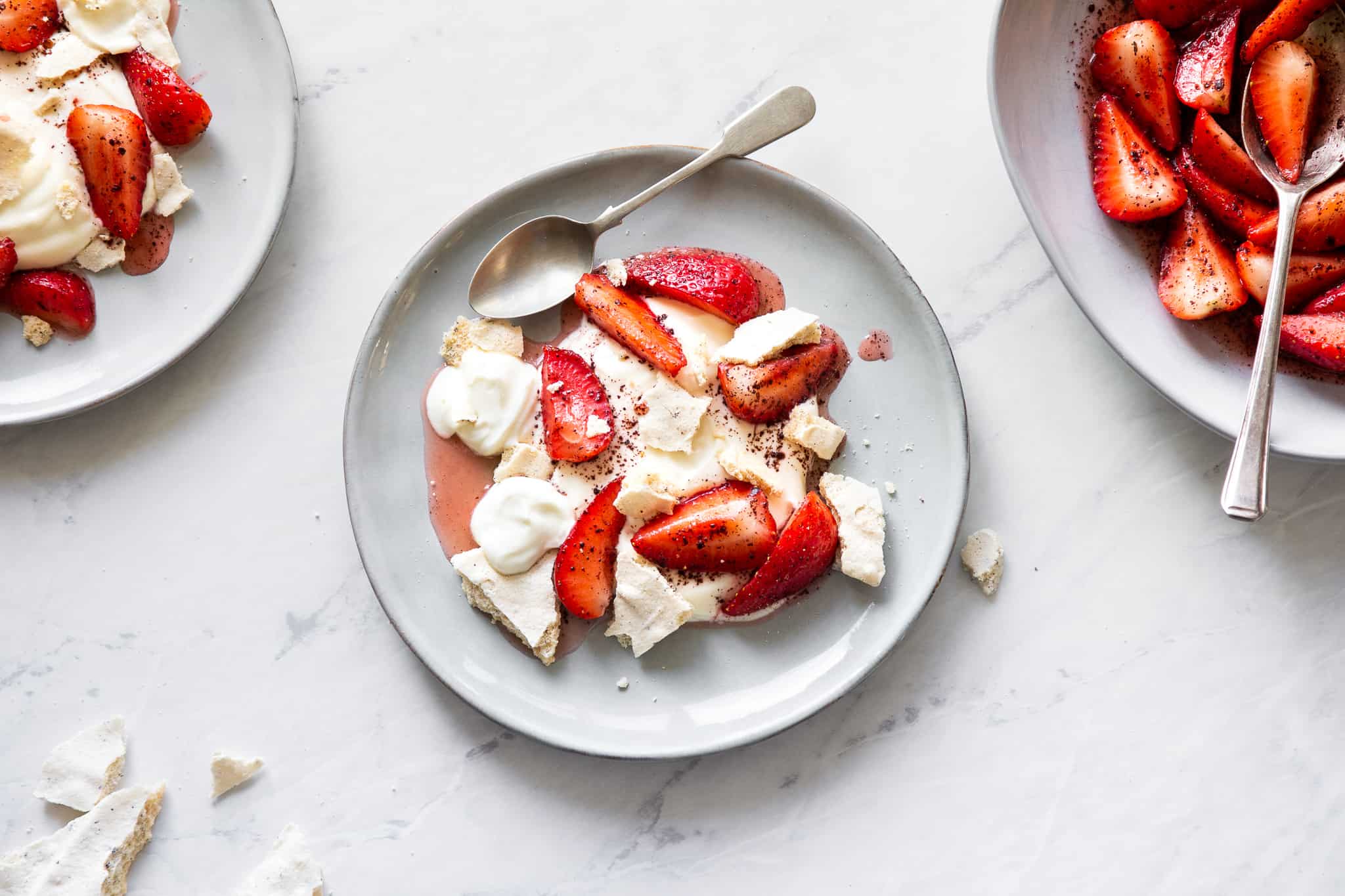 Eton Mess is just one of those summery British desserts that are so simple to make and taste so delicious. Together, strawberries, meringue and whipped cream just work wonders, which begs the question, why add anything else? Well, we promise that adding sumac to this easy dessert makes Eton Mess taste even better. Sumac just pairs wonderfully well with the strawberries and brings out their flavour even more beautifully. The extra dose added to the meringue also brings out a subtle lemony flavour and adds crunch and colour to it. Altogether, it’s just perfect. Try it, it just works!
RECIPE HERE

WHERE TO BUY IT?

Sumac is increasingly popular and now far easier to find in major supermarkets, but if you can’t seem to get your hands on it anywhere, here are our favourite online shops you can source it from:

-Spice Mountain - One of our favourite places for spices. They have an incredible array of interesting ingredients which they deliver to most countries worldwide.
-Rooted Spices - These quality single-origin spices come in beautiful tins and ship to a number of European and International countries.
-Sous Chef - There is little you cannot find at Sous Chef, and the foodie in you will be like a kid in a candy shop. Shipping to most European countries.
-Honey & Spice - The Honey & Spice deli from Honey & Co. has a wonderful array of Middle Eastern ingredients which they deliver on a weekly basis to UK Mainland.
There you have it! Our favourite ways to use sumac, no longer shall it sit at the back of your cupboard gathering dust! You now have the tools to create delightful and vibrant dishes using sumac, whether you want to add a new flavour profile to your favourite recipes or want to cook something radically new and exciting. Now, let’s get cooking! Let us know how you get on in the comments below. 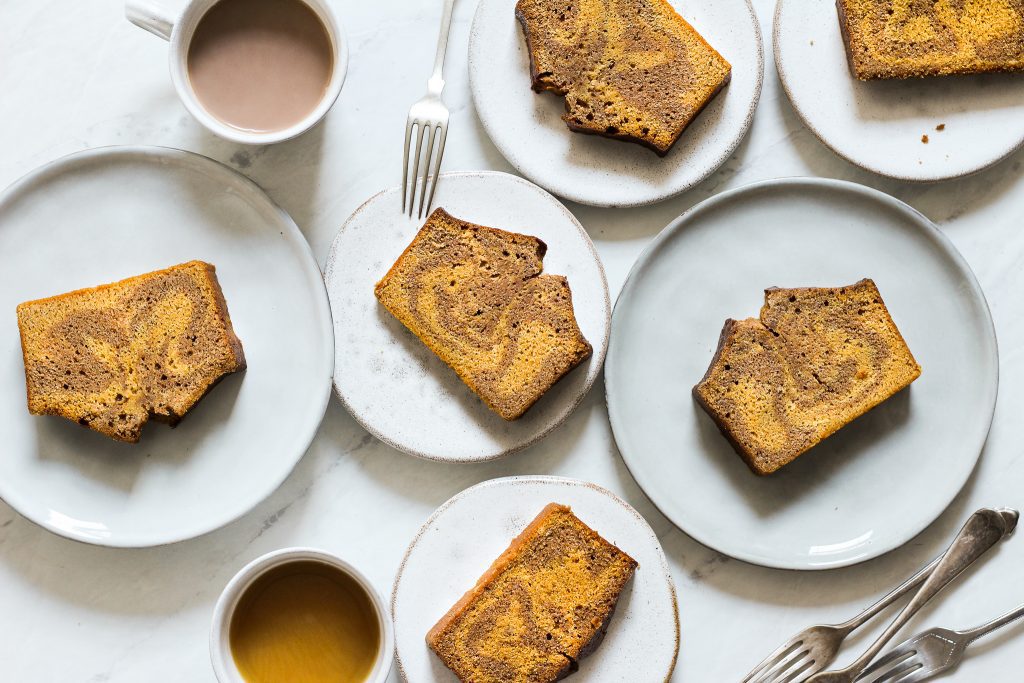 PERELLÓ OLIVES: THE SNACK TO END ALL SNACKS